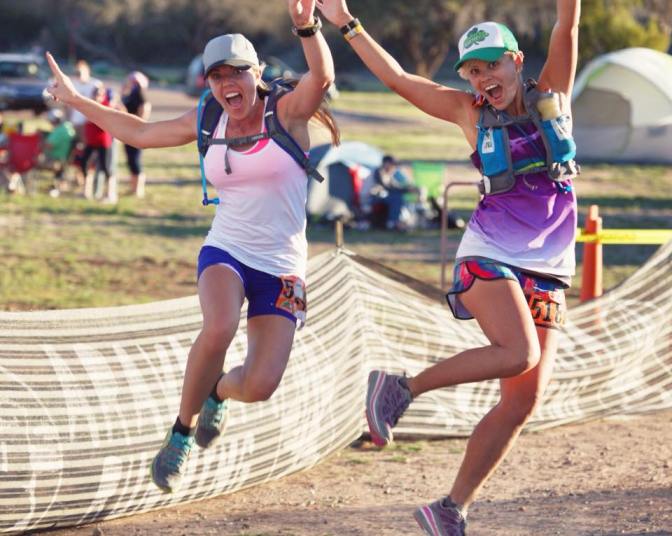 Sam and Maia Detmer at mile 40 of the Goldwater Rumble 100.

Recently I finished my 4th ultra-marathon and my 2nd 100-miler–the Coldwater Rumble 100. It was located in Goodyear, AZ and was a trail run that coursed through the Sierra Estrella mountain range. Unlike the first 100-miler that I completed, which was all on pavement stretching from point A to B, this race was five 20 mile loops all on trail. Because the two races were so different I thought of a number of different ways I could write this blog, such as giving a play-by-play of the experience or my top tips to a successful race, but I think I’ll go a different way for now.

One-hundred-miles. Most, including myself, have a hard time wrapping our minds around how in the world the body can go 100 miles. I mean…how long does that even take? Before I did this, if someone told me it took 10 hours or one week, I would have believed either…and it’s just because… Who does that exactly and why?! Now that I have done two, I can say with confidence, “I HAVE NO IDEA.” Haha. But really, there are a few enticing things that keep me craving for more running time. So I’ll touch on those today.

I wrote in a previous blog about trying to get to a point where you enjoy the struggle, because the struggle is where we find ourselves, and this point alone is the one reason that I like to do hard things. Truth be told, for me, the 100-miler doesn’t really start to get exhausting until about half way through. I’m unsure if it is because the body and mind are just so tired, or if it is because the darkness hits, and that’s when the emotions start to go crazy. During this race, at about mile 45 I started to become nauseated and this nausea lasted for 50 miles. So when the sun went down, the nausea just made the darkness even worse. My friend, Maggie, put it best: the darkness of an ultra-marathon is like the grim reaper; it just sucks every last bit of happiness out of you. Okay, I know this sounds a bit dramatic, but, honestly, that is how you feel, or how I feel at least. When the sun goes down, your emotions, exhaustion, and regret all rise. It’s like you’re running towards everything in your life and about yourself that you want to avoid. But out there, out there in the desert where the temps are freezing and the stars are the only bit of light you have, there are no distractions and there’s no way of trying to quick-fix anything. You are just forced to think about every regret and everything you want to change for hours and hours, As the temps become colder, the sadness becomes greater.

So this is the meat of why I love these runs—they force me to run to the parts of myself that I want to change and face those parts. This is not easy. In fact, it makes me pretty bummed out in many ways. During this race, the night seemed to have lasted forever. It was freezing and we could not warm up. Since this run was five 20-mile loops, each loop we had an opportunity to run past our tent and get any goods we need for the next 20 miles. When we came in from the 4th loop, finishing 80 miles, we were tired and cold. Literally our teeth were chattering and there was no where to warm up. There was a small furnace that a number of people were rallying around to steal some heat, but the warmth coming from it was nonexistent. This was the moment that I thought of how nice it would be to quit…and I wasn’t alone. I was standing next to two guys who decided after 80 miles, they’d had enough. But I knew I couldn’t do it. That’s when Maia (my running partner and this month’s Girl of the Month!) and I looked at each other, turned around, and started on the final 20 miles.

To bring a little perspective, these 20 miles don’t just take the length of time it would take to run 20 miles during a marathon—it takes much longer. Not only are you on trail, running/hiking up mountains and hills, but you’ve also just run 80 miles. One loop could be hours—and it was. By the time we left for our final loop, it was about 5am, the sun was down, we could not warm up, and I had an overwhelming desire to call everyone I love (and have ever loved) to tell them how much they have impacted my life. I felt guilty as a daughter, as a friend, and as a wife. I had just spent hours with all the worst parts about myself and I was tired of her. I prayed for the sun to come up because I knew, once the sun was up, I would warm up and a burst of joy would come with the morning—and it did.

But as the hours passed and as the sun rose, so did the heat. Maia and I were so hot that we felt like we were getting heat stroke. The cactus provided no shelter from the sun, and the clothes we wore to warm our bones without the sun were the same clothes baking our skin. It was hot, and the nausea was worse in the heat. At mile 93, we got to the aid station (the station provides drinks, food, sunscreen, Vaseline, etc), and I felt like I could no longer choke back the vomit. I had made a strategic decision early on to not allow myself to throw up out of the fear that I would break the puking seal and I would be sick as a dog. But the time had come. After being nauseated for over 15 hours, I was going to lose it. I bent down, accepting the reality, and knowing I could not go on feeling like this. I said a quick prayer that I would still have the mental confidence to do another 100-miler and I also prayed for the strength to forgive myself for quitting. I almost cried, but I lifted my head and stood up. As I opened my mouth to tell Maia I was done, surprisingly I said this instead: “Mai, stay here as long as you want. I can barely move I feel so ill, but if I don’t move, I’m going to quit.” So my pacer/friend, Kelly, and I started hiking the last 7 miles.

This is the point that some people have a hard time understanding. I mean, how can a person go 93 miles and still think of throwing in the towel? I get it. I used to think the same thing, and I don’t know. It doesn’t make sense to me thinking clearly as I am now, but I do know that during the time, 7 miles may as well be another 100. Your body is done. It is only your mind keeping you going, and your mind is mush. Your strongest ally can also be your biggest challenge out there. Memories pop in your head of a big warm comfy bed and an extremely hot shower. You are out there just fighting with your mind to block out all the comforts of quitting. Constantly my mind kept telling me if I stop the sickness would pass. But immediate gratification doesn’t have a place out there in the desert when your goal is to finish.

By the time we had 4 miles left, Maia and I were hot, exhausted, and not allowing ourselves to feel the joy of finishing just yet. As we were hiking around the hills, we saw a familiar bend, and I looked at her and we both agreed that after this bend we would see the finish sign. We smiled at each other, cried a bit, and pressed on. Once we got to the anticipated bend, we could barely hold in the excitement when, as we turned, all we saw were hills, trails, and mountains—no people, no food, no music, no finish. Our joy was crushed, but we kept moving. We were silent and only paying attention to the rhythm of our footsteps that we had come to know so well.

Shortly after, we crossed the finish, hand in hand, understanding full well that each of us had just experienced another part of one another that no one else had, and it was beautiful. By the end of the race the results were public, and we knew that, of the 72 people who started the 100-miler, only 33 people finished. We were amongst the finishers and we were proud. But, as strong as I felt mentally, this success would not have been possible without Shannon and Kelly—our two amazing friends and pacers. You two ladies are something beyond words. Also, I have to thank and acknowledge Maia. There is something very intimate about struggling with someone and I am so thankful that for those dark-night hours. Maia may have seen some of the worst parts of me, but still held my hand at the end.

The struggle. It can’t be explained, re-imagined, or taken for granted. The struggle has made me who I am and I am so thankful that life has not been easy. I am equally thankful that, even when life is easy, I put myself through the struggle voluntarily. Don’t shy away from the struggle. It is scary and your mind will play tricks on you. Run towards those parts of yourself that you don’t like, get to know them, and then do something about them. We are in this together, holding hands and crossing the finish line. What can I say? Guts and girls have changed my life.

Maia Detmer and Sam crossing the finish line of the Goldwater Rumble 100.

View all posts by gutslikeagirl